This cute one is the Olympus Trip 35, a fully-automatic viewfinder camera made from 1968 to 1983. It was originally intended for the snapshooter market, but it's developed a weird cult following among serious photographers in the Internet era. I got one a couple of years ago to see what all the fuss was about. As we all know, cult cameras usually become cult cameras because they are so bad. This is a cult camera because it's awesome: tiny, tough, simple, and fun, with a great lens.

Mostly metal, and all gorgeous. It's perfect for me; small enough that it fits happily in the side pocket of my tiny LowePro Nova bag, but substantial enough that it doesn't feel awkward to use. Weight-wise (about 400g), it's the same deal: heavy enough that you feel like you're using a real camera, light enough that you don't mind carrying it about. It's built as well as any other camera I've used, even my gigantic, three-pound D2H.

Hey, before I replaced the leatherette with the lovely British Racing Green one sent to me by a kind reader, my Trip's leatherette was in OK condition. My D2H's leatherette, shortly before I killed that camera, was tatty, peeling, and stretching so bad that I had to cut away a huge chunk of it just so I could use the front command dial, despite being about thirty years newer.

It's got a superb non-interchangeable 40mm f/2.8, with four elements in three groups. 40mm is a great focal length; it lets you get a bit closer (and get slightly punchier-looking images) than a 50mm, without distorting perspective like a wide-angle.

It is sharp. Sharp sharp sharp, right out to the corners at every aperture, with no distortion. SLR lenses have to do all sorts of optical contortions because they have to have enough space from the rear of the lens to the film plane to clear the massive SLR mirror. Cute little fixed-lens cameras like this don't have this problem; they can be designed from the ground up to position the lens at the optimal distance from the focal plane. It's also why a Leica rangefinder camera with a lens costing an order of magnitude or two more than this camera is so great, too.

If it bothers you, there's a decent amount of falloff at the larger apertures. I couldn't find a test card or a grey wall to photograph, so I snapped this at last light on Velvia 50 which demonstrates it almost as well:

The big thing coming between you and a sharp photo is that you don't have a good focusing aid like an SLR viewfinder or a rangefinder (even though the body looks like it should be a rangefinder camera). I'll get to a related issue under "Focusing" below.

It has a screwy 43.5mm filter thread. The Trip Man has a few filters (mostly coloured filters for black-and-white film) over this way. 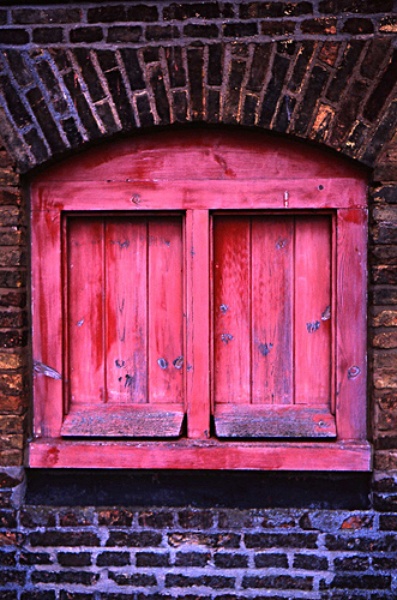 The Trip 35 has a simple optical viewfinder, with no parallax correction (but parallax marks in the frame for close-focusing).

I'm paranoid, so I tend to leave myself a little bit of headroom and crop later.

Selenium cell around the lens, functional down to about EV 8. I'd expect that this will work in a more-or-less averaging-across-the-whole-frame fashion, but I can't really prove that.

Looking at the graph of the Trip 35's program, I noticed that after EV 13, the aperture is opened by one stop, while the shutter speed increases by more than two stops to 1/200; shooting in this range might be slightly inaccurate. Then again, there seems to be a relatively consistent slight overexposure throughout its operating range. Don't lose sleep over it; better photographers than me have shot slide film with it, and this is nothing that won't come out in the wash with any negative film.

Beware of very strong peripheral light sources (like the sun) outside of the frame, because I suspect the meter will account for these even when they're outside of the lens' (and viewfinder's) field of view.

I've read that you should keep a lens cap on it at all times, to avoid wearing out the selenium cell.

The shutter has a whole two speeds: 1/40 and 1/200, which are automatically selected. Flash sync is at 1/40. No Bulb or self-timer. The shutter is almost silent; an almost unaudible click. Not as quiet as a leaf shutter, but doesn't make people duck for cover, either.

Fully automatic. Taking the aperture ring away from "A" will set the shutter speed to 1/40, for use with flash, or for ultra-fast films for night photography. There's a whole Flickr group dedicated to the latter! Some weirdos modify their Trips to allow manual setting of the shutter speed; that, combined with taking the aperture ring off A, will allow you to shoot it fully manually. I don't know why anyone would do this.

The meter has settings for ASA 25, 50, then up to 400 in third-stops, which covers any film that sensible people use today.

Manual, by a thumb wheel. It takes several turns, but it's worth it. It's also a lot easier to do single-handed while running between shots then the film advance lever of 35mm SLR cameras.

We're in 1968, so no fancy flash control here. Just about every electronic flash will work fine. Take the aperture off "A" and the shutter will be set to 1/40th.

Because of the wimpy flash sync speed, this is meant for nuking subjects indoors with direct flash, not for fill flash in daylight. You might be able to do the latter with an enormous, powerful flash like a Nissin 360TW, but the added size and weight would defeat the point of shooting a Trip 35.

It also has a Prontor-Compur socket, for use with studio strobes, which means it does at least one thing that, say, my much newer, bigger, heavier, and more expensive Canon T90 professional SLR (or today's Canon 60D) did not.

Zone focus, at 1 metre, 1.5 metres, 3 metres, and infinity. I have a whole absurdly detailed and graphed-up page on which focus zone is the sharpest if your subject is not exactly on one of these zones. If you don't care to read that, here's the focusing zones to pick for optimal sharpness:

Convert it into feet yourself; I'm too lazy. Of course, you're free to use the scale on the bottom of the lens and set intermediate focus distances. If you're comfortable with both metric and Imperial measurements, as I am, you're in luck because there's also intermediate distance measurements on the scale in feet.

If unsharpness from focus inaccuracy bothers you that much, shoot a decent ASA 400 film, which will give you more depth of field to cover up any focus error.

Nope! The Trip is effectively solar-powered; the light it meters off powers the camera's auto-exposure mechanism. Hooray!

The reason people (I'm not saying I'm one of them) get such superb results from this camera has nothing to do with its technical image quality. It's because it's fun. It's liberating. It frees up the mental bandwidth you would otherwise use for technical trivia and gives it over to your creativity.

Reading this page will not do it justice; you have to take one for a spin to appreciate just how well-designed, well-built, and downright awesome this little thing is, and how much just about everything else (and absolutely everything digital) sucks. It's so good that a friend of mine immediately sold his nearly-new digital SLR as soon as he saw his results from his Trip!

The Trip 35 is great for people who don't want to be hassled about taking photographs. As a terrorist, this is important to me. If anyone hears the almost-silent shutter, the camera is more likely to arouse polite interest rather than suspicion. With a fast film (to force a smaller aperture to give you depth of field), it works great for large moving subjects like trains. It works better than the 8-frames-per-second digital SLR that I killed for this because there's no temptation to start firing a burst too early and having mirror black-out cause you to miss the perfect framing of your shot.

Boring Train Picture #3, shot on a terrorist reconnaisance mission, with an Olympus Trip 35 and Ilford XP2.

The good news is that the Trip has no electronic components. Hooray!

Of course, some of these cameras are over 40 years old now, so you're bound to have some reliability issues. That's just how it is. Here are some repair instructions for the brave, if yours has issues. I'd send it to the Norfolk Camera Centre if it stopped working.

If you're paranoid about meter accuracy, I'd recommend shooting at least one roll of slide film with it, like Fuji Velvia, and sending it off to be developed and scanned at a good lab (like Fuji's very own lab in Leeds).

It's rare that I'll give an unqualified recommendation that anyone should buy a particular camera, which is why you should take it seriously when I say you want one of these. Once you use a camera that doesn't let you worry about technical trivia, you'll realise just how unimportant it is to getting great shots. If you just can't live without proper focusing aids and manual exposure, get a Olympus 35RC instead. If all of my cameras but this little fellow were stolen, I would miss very little. Despite their cult following, they're not expensive at all (there were, after all, over 10 million of them made, according to Olympus).

If you're after a near-pristine example, this guy sells them for about £50.

Thanks to Brynn, my favourite Canadian rock star robot ninja pirate doctor, for sending this to me. :)