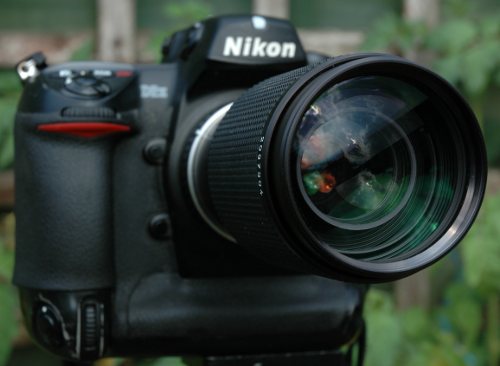 This is the Nikon Series E 70-210mm f/4, a great and cheap manual-focus lens. It's my default lens for product photography.

"Series E" means "cheap". Nikon wanted to cash in on the cheapskate market, without sullying the Nikkor name (note that the lens is called Nikon, not Nikkor as all other Nikon lenses are). That's all there is to it.

Mostly metal, including the mount. The aperture ring is plastic. The focusing barrel is covered in hard-ish rubber, which digital SLRs have a hard time focusing on, for some reason.

It feels nicer than most AF lenses, but not as nice as Nikkor manual-focus lenses.

It weighs 730 grams, according to Nikon.

It has 13 elements in 9 groups, woohoo! The front and rear elements, at the least, are multicoated. I'm not taking mine apart to find out about the rest, sorry.

f/4 throughout the full zoom range, stopping down to f/32.

It will mount on all Nikon SLRs, film and digital. The cheaper digital SLRs and film cameras won't give you metering. All AF bodies will give you focus confirmation, though.

I can't hope to detail every camera, so just go look at Ken Rockwell's lens compatibility chart, and look down the "AF, AF-D" column. (You heard me right. The 70-210mm f/4 is not an autofocus lens, but AF and AF-D lenses are AI-S lenses just like the E is, and lack meter coupling prongs for pre-1977 cameras, just like the E does.)

Yes, for f/11 and f/32; the lines are coloured the same as the relevant number on the aperture ring.

The red line is an infrared focusing index.

The manual is a lovely little booklet, rather than the stupid 2-feet-wide-unfolded pieces of paper that you get with modern lenses. When and why did Nikon start cheaping out?

62mm. There's no separate bayonet for a hood.

The E is as good as cheap lenses come, which is why I use it for product photography.

It feels great. It balances a Nikon D2H wonderfully. On the downside, the aperture ring feels a bit nasty.

The E is sharp at every aperture and every focal length across the whole frame on DX digital; I've not tested this on a full-frame camera.

There's plenty of flare, if you're trying, and don't mind going blind. Don't worry about this; either don't point it into the sun or use flare for creative effect.

Yup, mine creeps to 70mm when zoomed to 210mm and pointed down, and it'll creep from 70mm to 210mm when pointed up and focused past 5 feet (the mechanics stop it from doing so when it's in the macro range at 70mm).

I'm not sure if this is normal or a problem with my E.

The E focuses super-duper close! It'll focus down to 0.56 meters (just under 2 feet) at 70mm, and 1.5 meters (5 feet) everywhere else in the zoom range. This is closer than almost every non-macro ("Micro") full-frame Nikon lens.

I'd expect somewhat more on full-frame and film.

I prefer manual focus lenses like these for product photography because these shots are usually focused manually, and the manual focus feels great on this, unlike most AF lenses. Get one if you need one; they're cheap and perform excellently.

I got mine for free (thanks Mark!), but you can find them on eBay for about £50-£100. It's a great lens for photographing static objects on AF cameras and for everything on manual focus cameras, less so for anything that moves.

If your digital SLR isn't compatible, I'd forget this and get a 55-200mm VR instead, which covers nearly the same zoom range and gives you autofocus and metering.

Thanks to reader Leslie Cole for correcting the manufacturing dates of the AF version of this lens. The original years I had were 1986 to 1995. This was wrong; I was likely confusing it with some version of the f/4-5.6 AF lens.