Since my page on getting started with film photography was one of the more popular pages on my site, I figured I'd write a little guide on the best film cameras you can buy on the cheap. Here it is! Remember I am limiting this to either cameras I own, have used, or come highly recommended by people whose opinions I trust.

All prices are in British Pounds. Sorry guys, while a majority of my visitors are from the USA, I'm from England. Relative prices may vary accordingly.

Jump to: The fun fixed-lens camera - The tough manual SLR - The ugly SLR - The greatest 35mm camera of all time - The pro camera - Starting from another camera system - Why so much Canon?

If you don't already have compatible lenses from another system, the cheapest way to get into film photography is to buy either a fixed-lens camera or an interchangeable-lens camera from a camera system completely incompatible with today's digital SLRs, which keeps the prices of lenses down.

If you're after a film camera to mess around with, you want one of these.

Yes, it's scale focus and doesn't have any manual exposure at all and hey! Stop that! Here's a picture of a cat with a blanket!!!

The Trip 35 is incredible. It's funny, because I'd usually treat any camera with a cult following as a camera that's worth avoiding, since their fans usually like them because they're so bad, just like Land Rover owners. Think the Diana, Holga, Kiev 88, etc. Not so with the little Trip; it's very reliable (being incredibly simple), built as tough as any professional camera, and has a lens as sharp as or sharper than lenses which cost a hundred times as much, for a digital SLR that would cost a hundred times as much again. Best of all: No batteries! Woohoo!

The MTL3, and its siblings like the MTL5, are simple and extremely tough East German cameras. 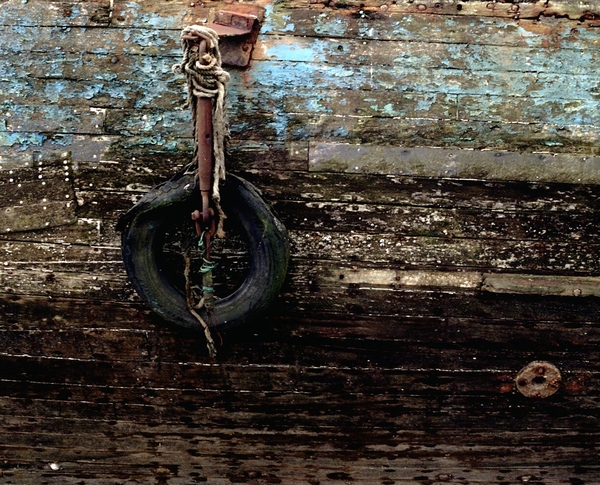 I said extremely tough: I heard from one guy whose MTL3 tumbled down a rock face, and still worked afterwards. The worst mine suffered - and there were many more minor abuses - was having 70 kilograms (about 155 pounds) of engine hoist fall over and land on it, which it survived without a dent (though it did utterly destroy the shelf it was sitting on).

This is also my top recommendation if you're taking a photography class which, as many of them do, mandate using a manual-focus, manual-exposure camera.

If you want longer lenses for portraits, then forget the MTL3; the best of these lenses happen to be very sought after for using on Canon digital SLRs via an adapter. For example, the renowned Pentacon "bokeh monster" 135mm f/2.8 often sells for upwards of £80, which would buy you a Canon A-1 plus goodies.

Bonus: Notwithstanding what I said about portrait lenses above, you can get great lenses for it cheaply, if you look at "spares or repairs" lenses on eBay. M42 lenses are very, very simple mechanically; I've stripped, cleaned and rebuilt three of them just for kicks, without a service manual. I got three of them stripped and cleaned for £30 by my homeboys at the Norfolk Camera Centre. Another bonus is that if you don't mind carrying around an external meter, the MTL3 will work fine without a battery; the only electronic component is the meter, which only tells you what exposure to set.

Krystle with the Canon T50. I didn't have time to take a good picture of my T50, so I sent Krystle back in time to 1985 to model for page 18 of the manual. It was expensive, but my dog was grateful for the extra 15 minutes of toy-throwing time. (I'm lying; Krystle's my friend and gave me permission to use this picture. Thanks!)

The T50 is about the ugliest camera ever made. It's also a great performer, if you can live with its lack of anything but fully automatic exposure: 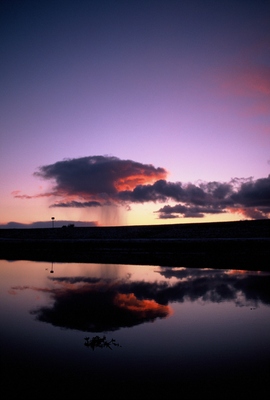 The greatest 35mm camera of all time: Canon A-1

If you can live with the slow flash sync, the Canon A-1 is about the best 35mm film camera you can buy at any price. If your film camera budget can stretch that far, it's a no-brainer. 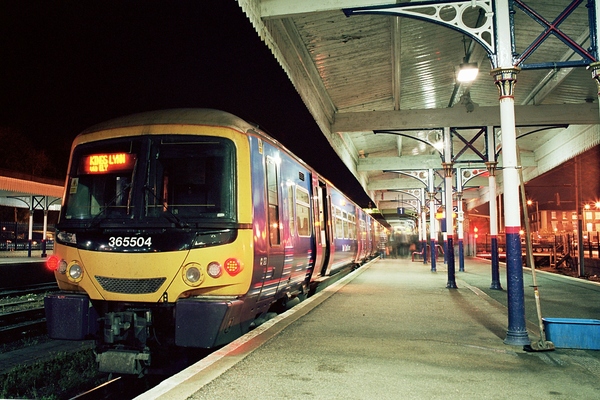 Cost: About £60 for body, lens, and whatever random accessories your seller wants to include.

Alternatives: The very numerous AE-1 and AE-1 Program are much the same as the A-1, and go for about the same price, but don't offer aperture-priority automation. You probably know someone who owns one of these, so you can probably get one for free. 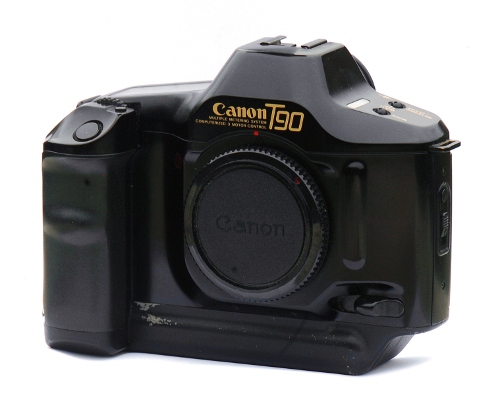 I prefer my A-1 over the T90 (which is why I sold my T90), but for people who want a Serious Looking Camera and something tough enough to use as a hammer, the Canon T90 is a winner. It's got ergonomics closer to a modern digital SLR, it's tougher than nails, and is cleverer than any manual-focus camera ever made. Better, for people using fill-flash outdoors, the T50 has a flash sync of 1/250, which is as fast as or faster than any digital SLR made today. Huzzah! 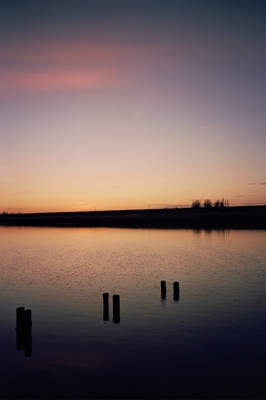 Lenses: see the T50 above (it takes the same Canon FD lenses), although the T90 will look weird with early Canon FD lenses with chrome locking rings. It should work with Canon FL lenses if you hit the stop-down metering switch.

Starting from another camera system

If you already have lenses for your digital SLR camera, it might behoove you to look at cheap SLRs from a compatible camera system. I recommend these only if you have compatible lenses; because lenses that work on these cameras are compatible with today's digital SLRs, they're more sought after than lenses that only work on obsolete camera systems, and charge the according premium. If you're bogged down by compatibility below, then just start afresh with a different system, as recommended above. For example, I'd recommend the F55 if you have a 50mm f/1.8 or a 28-80mm zoom kicking around; add one of these to the price of the camera and you're easily going to pay more than you would for an A-1.

On the other hand, if you don't own a lens for these full-frame cameras, you might want to check out one of the cheaper 50mm lenses for use with your digital SLRs and with film. For example, the Nikon 50mm f/1.8D is my favourite portrait lens on Nikon DX digital cameras, and also works perfectly with my F55. The Pentax 50mm f/2 is one of the sharpest lenses out there, and works perfectly with today's Pentax digital SLRs.

The F55, aka the N55, is a teeny-weeny lightweight plastic SLR camera with an excellent 5-segment matrix meter and which, if you're photographing still subjects, will do everything that big, heavy professional cameras like the F5 and F6 do, for a fraction of the price. If you don't have a neck like a tree trunk, it will get you better photographs, because you'll want to carry it around with you! 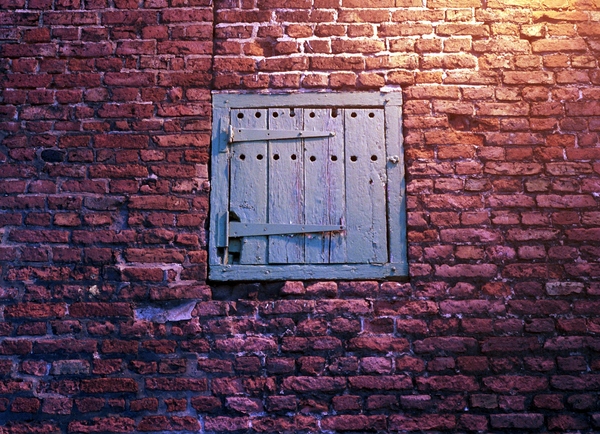 Compatibility with your digital SLR lenses: This will work with screw-type AF lenses; you'll lose autofocus with AF-S lenses, and won't meter with manual-focus AI or AI-S lenses. Some of Nikon's DX lenses, which are designed for small-sensored digital cameras, will mount and work to some degree on the F55, but you'll end up with darkened corners at the shorter focal lengths. Some won't work at all, like the 18-55mm DX. All of them will require focusing manually, since all DX lenses are also AF-S lenses.

Canon EOS 300V. Photo by this guy, licensed under a Creative Commons license.

I didn't get to play with the 300 for long (when I get to borrow one again I'll let you all know more), but here's another pair of stupid plastic SLRs which does everything that more expensive cameras do for less weight and money.

The 300V is a more modern, slightly tougher EOS 300. They're in an identical class of camera, and will get you just the same results.

Compatibility with your digital SLR lenses: All full-frame Canon EF lenses will work on it. EF-S lenses designed for digital cameras will not mount, and even if you modified them to mount (as everyone had to do back in the bad old days of the EOS 10D digital SLR), you'd destroy your camera when the rear element of these lenses whacked into your mirror, which is also exactly what would happen if you tried to mount them on today's digital 5D Mark II.

Alternatives: I picked the 300 and 300V for no particular reason. Any of the other less-loved EOS film camera bodies can be picked up just as cheaply. 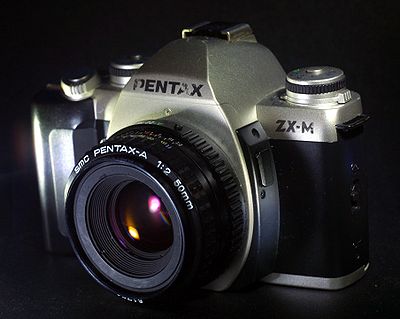 The ZX-M, an ultra-light manual-focus member of the ZX/MZ series.

More cheap plastic SLRs! I don't have a great deal to add to this that isn't implicitly covered in the above paragraphs: plastic SLRs are great fun.

Compatibility with your digital SLR lenses: Iffy. DA lenses designed for Pentax digital SLRs tend to have even more severe vignetting on full-frame cameras than Nikon DX lenses do; depending on the lens, you could be stuck at the very longest end of your zoom. On the other hand, all full-frame lenses should work just great, possibly losing you aperture-priority automation if you have a lens without an aperture ring.

Things I'm yet to look into

The Minolta Maxxum 7000 goes very cheap these days, as do all the autofocus Minolta film bodies. It's mostly compatible with your Sony digital SLR lenses (minus the darkened corners thing I mentioned in the context of Nikon above). It also has horrible ergonomics compared to any of the cameras I've mentioned above; if I come across a Minolta body that does not I'll let you all know.

I keep meaning to try some Minolta manual-focus bodies. Oddly, I have a Minolta 50mm f/1.7 kicking around.

Why so much Canon?

Astroturf, of course: Because Canon pays me and a whole lot of people with tiny photography websites nobody cares about, to talk about cameras that they haven't sold in two and a half decades.

Actually, it's more simple than that: The three Canon FD cameras above take lenses that are completely incompatible with any camera made in the last 20 years. I hinted at this earlier, but Nikon maintained some degree of compatibility between their manual focus and autofocus systems (and from there onto digital SLRs), thus, Nikon lenses tend to sell for far more than Canon FD lenses. FD bodies also tend to go for maybe half of what an equivalent Nikon in its class would sell for. That's just how it is. Remember, this is about cheap film cameras.