Here is my improvised macro lens for my old Canon digital SLR. It's a Helios 44M-4 M42-mount lens and a teleconverter with the optics removed (and so acting as an extension tube), mounted to the camera by an M42-to-EOS adapter. This was actually free for me, because I already owned the stuff, but you can do your own for about £30 or less, which is a fraction of the price of a true macro lens, and still far less than a set of EF extension tubes.[1]

The hackers out there will either be all "duh", or maybe "oh, I hadn't thought of that" and then go right out and do it; for the rest of you, here's the lowdown.

This is the Helios 44M-4, a Soviet 58mm f/2ski, M42-mount lens. Not only is it about the cheapest lens that you can buy for any camera system, it's also very highly regarded by M42-on-DSLR shooters. One possible issue is that the aperture only stops down to f/16, which might not give you sufficient depth of field in some scenarios.

I actually had to modify this Helios lens because it's one with an automatic diaphragm and without an M/A switch, which would have meant shooting wide-open all the time. The conversion to a manual diaphragm is straightforward. Remove the four screws on the back of the lens that hold the lens mount plate in place. Remove the plate, and the diaphragm stop-down pin should drop right out. File about 5mm from the pin (from the end that would normally poke out of the lens body). Mix some two-part epoxy (or any other strong adhesive), dip the tip of the pin into it, then slide it into its hole in the lens mount plate so that it's reccessed (from the outside view) about 2mm. Fill the gap with more epoxy, allow to set, then re-assemble the lens.

If the risk of the epoxy breaking and falling into your nice digital SLR scares you, or if you find this method a bit violent, there's an idea for a reversible modification procedure by Jerry Flo. Failing that, buy a Helios 44-2, which is pretty much the same thing, and (so I read) has a manual diaphragm right out of the box.

There's also the Pentacon 50mm f/1.8, which is a bit shorter, but focuses much more closely than the Helios 58mm (0.3 metres as opposed to 0.5), and sells at about the same price. The Pentacon is a little less sharp, though.

Cost: about £20, or much less if you're good at eBay auctions.

Splashing out: Don't. Something like the Pentacon 135mm f/2.8 might be tempting because it will get you more working distance, but if I read this right you'll need to stack about 5 of the gutted teleconverters below to get a 1:1 reproduction ratio. I wouldn't bother with anything more expensive (like the superb Takumar lenses) if you don't already have them; you'll end up paying more for that setup than you can get a set of real EF extension tubes for.

Want cheap extension tubes? Get the cheapest, nastiest teleconverter you can find and knock the glass out of it with a hammer. Here's one I got free with a 50mm f/2.8 Zeiss Tessar:

This is the macro part: the gutted teleconverter shifts the lens forward, which allows the lens to focus to extremely close distances. The downside is that you can no longer focus to longer distances, which is fine.

Note that this will increase your effective f-stop proportional to the length of your extension. Add 50mm of dead teleconverter to a 50mm f/1.8 lens, and it effectively becomes an f/3.6. There's more about that over over here (PDF document).

Cost: free if you're me. If you snipe eBay auctions, you can pick one of these up at the typical starting bid (often £1) plus shipping, since nobody wants them for actual photography. Buy two of them if you want true 1:1 macro on a 50mm lens.

Splashing out: get a real M42 extension tube, which go for less than £10 on eBay with "Buy It Now".

Not much to say here: this is a cheap M42-to-EF-mount adapter for Canon EOS cameras from a Chinese machine shop. Thanks, China!

Splashing out: get one with a chip, which go for just shy of £10. This will give you focus confirmation, which makes life easier, especially on a tiny 1.6x viewfinder. On the other hand, I would not trust an expensive camera with one of these: It's entirely possible that a bad chip could fry your camera. This has actually happened, so watch out.

How to use it

Switch to aperture-priority (Av) mode. Carefully focus at your widest aperture (f/2), then quickly jam the lens over to f/16 when you're done (you'll need the depth of field) and shoot. You'll want to be on a tripod for this.

How well it works 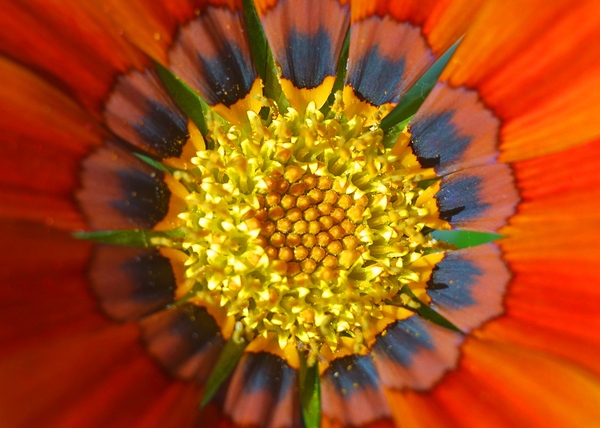 Not especially sharp (though this is just as easily attributable to shooting it hand-held). This isn't quite true 1:1 macro, but it's getting close (I work it out to be 1:1.7, and if I stacked two of them I'd be at 1.1:1).

That was with a tripod, self-timer, and mirror lock-up. Again, not extremely sharp, but it does the job just fine. Hey, I'll leave it to people with talent to get really good results:

Purple flower by Caidoz shot with my improvised macro lens, used with permission.

On other camera systems

This may or may not work on Nikon cameras. Pentax K-mount digital SLRs should work great, even giving you focus confirmation.